Death of Mendieta must be turning point for Indonesia 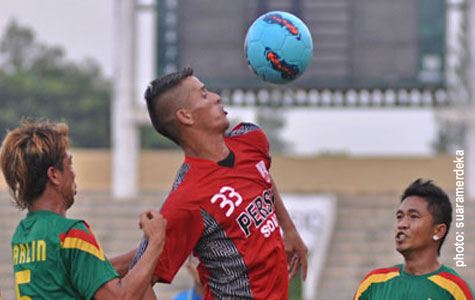 FIFPro is concerned about the situation in Indonesian professional football. Last Friday, FIFA decided to issue a final warning to the Indonesian football authorities, to reform their football under the supervision of AFC. But FIFPro fears that this extension will not lead to necessary and urgent reforms, with the professional footballers being the victims of this indecision.

FIFA has extended the deadline until March 2013.
The longstanding political and administrative conflict within Indonesian football and the recent tragic death of Paraguayan footballer Diego Mendieta have raised FIFPro’s concerns.

FIFPro has been informed about the dramatic situation regarding the payment of the footballers in Indonesia, as 25 of the 30 professional clubs in the country’s top leagues Indonesian Premier League (IPL) and Indonesian Super League (ISL) are behind with paying salaries (see below). FIFPro has also understood that the ISL is planning to kick-off its 2012-2013 season in January, even when there are many players who still haven’t received their salaries.

It is high time the situation changes for the good of the professional footballers, is the opinion of FIFPro secretary general Theo van Seggelen. Speaking after a two day meeting of the FIFPro Board which considered the situation in Indonesia in detail, Van Seggelen said: ‘The internal political conflict within Indonesian football is taking too long to resolve. For almost two years already, the players are living in uncertainty about their future. Many of them are coping with financial difficulties, due to clubs who refuse to pay their salaries (on time).’

‘The recent tragic death of Diego Mendieta from typhoid and the cytomegalo virus after being unable to afford medical care due to the non-payment of his salary must be a turning point for Indonesian football. The game must now embrace the highest standards of governance, be run as a business and respect the rights of players.’

Brendan Schwab, a member of the Board of FIFPro and Chairman of FIFPro Division Asia/Oceania, said that FIFPro remains fully committed to the development of professional football in Indonesia and supporting the players.

‘Indonesia remains the biggest football nation in South East Asia due to the sheer scale of the fan base and its passion for Indonesia’s local clubs and the Merah Putih, the national team,’ Schwab said. ‘However, this potential will only be realised if the game implements the key reforms that are overdue:

In Indonesia 25 of 30 clubs don’t pay
Many professional footballers in Indonesia are waiting for their salaries. From the 30 clubs in the two top professional leagues, only 5 clubs have paid their players in full.

Fourteen of the eighteen clubs in the Indonesian Super League (ISL) are behind with the payment of the salaries. The situation is the worst at PSPS Pekanbaru. Players at that club have not been paid for ten months. In the Indonesian Premier League (IPL) the situation is just as bad: ten out of twelve clubs are late in paying salaries. The following clubs owe at least two months’ salaries to their players:

Four of the clubs in the IPL terminated the players’ contracts and still have to pay their players:

The five clubs that – according to FIFPro information – fully paid their players are:
Persipura Jayapura, Mitra Kukar, Persiram, Persib Bandung (all ISL) and Arema (IPL)

FIFPro suspects that the situation of the lower divisions will likely be worse. Diego Mendieta was playing at second league side Persis Solo and had not received his salary for four months.