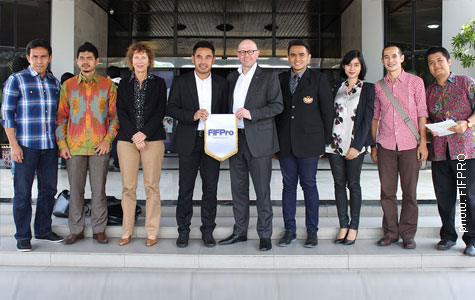 On October 9th FIFPro and APPI brought a substantial delegation to Jakarta for a meeting with the PSSI because of the seriousness of the issues confronting players in Indonesia. Whilst FIFPro and APPI were pleased to receive confirmation of the planned reunification of the Indonesian football associations and leagues from January/February 2014, they were very disappointed to hear again that the PSSI does not recognise APPI.

In July, FIFPro Secretary General Theo van Seggelen had already reminded the PSSI of its obligation to recognise APPI as the representative body of the professional footballers of Indonesia, as this is necessary to give effect to the Memorandum of Understanding signed by FIFA and FIFPro in 2006.

During the meeting, the PSSI made clear that it only recognised one players’ association in Indonesia, that is called APSNI, which does not even represent current professional footballers. PSSI went as far in the meeting to call on APPI to seek a merger with APSNI.

FIFPro and APPI regard this insistence by the PSSI as an unwarranted and unnecessary distraction from the key issues which Indonesia’s professional footballers are presently confronting and which need to be addressed if Indonesian football is to be successfully reunified in 2014.

Those key issues are:

Schwab: ‘It is essential for the well-being of Indonesian football and its players that the many problems that have affected Indonesian players in the past do not arise in the new league.’

At a minimum, this will require PSSI, the league and APPI to agree on the terms of a standard player contract that meet the minimum contract requirements published by FIFA and the establishment of a national dispute resolution chamber, in accordance with the requirements published by FIFA, on the basis of parity in the representatives of clubs and players. PSSI states that it has established a chamber, but it clearly falls short of these standards as it has been established without the involvement and agreement of APPI and FIFPro.

FIFPro and APPI would therefore like to enter into formal negotiations with PSSI, the league and representatives of the clubs to reach a collective bargaining agreement that addresses the three points mentioned above and advances the good governance and sporting quality of Indonesian football.